Your cart is currently empty.

“There is a tremendous amount of creativity and cleverness being displayed, all backed by a fervent devotion to making the sky more accessible and enjoyable for astronomy enthusiasts at all levels. It is truly inspiring.”
Robert Naeye, Sky & Telescope Editor in Chief
Note 1: Prior to using a laser you will need to first check/set a Newtonian telescope’s secondary mirror using a sight-tube. Fortunately once set it rarely needs further adjustment.

Note 2: For any laser collimator to be effective it needs to be fitted to a well-made focuser. The regular rack-and-pinion style focuser fitted to many beginner/intermediate telescopes lacks precision and rigidity. If in doubt please contact us for advice.

The SCA mechanism serves three critical functions: It’s expansion rings accommodate almost all focuser’s manufacturing tolerances. It automatically centres the adapting laser and provides at least two evenly distributed circular contacts on the focuser’s inner tube surface preventing the laser from pivoting. Once the ‘slop’ factor is removed you can quickly and precisely collimate your telescope with confidence.

With Hotech’s proprietary laser crosshair you can zero-in the laser with ease during the final collimation on the secondary and primary mirror. The crosshair model displays a precision laser centre dot with four extended laser lines for easier and more intuitive centering.

During the secondary mirror collimation, a single dot laser projecting on the approximate center of the pre-loaded donut can be difficult to identify if the laser dot is exactly on the center. The crosshair laser can easily help user to adjust the secondary mirror to point the laser on the exact centre with the help of the crosshair line. During the final primary mirror collimation the returning laser dot often hides inside the laser exiting hole when centred whereas the crosshair is visible at all times. 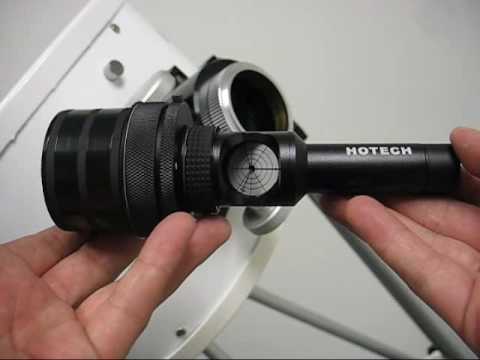 Collimation for your SCT

Traditional laser collimators are not suitable for collimating SCT telescopes but the Hotech laser’s SCA mechanism and detailed faceplate provide the accuracy and repeatability necessary for even SCT collimation.

Commercially made SCT telescopes all have slight optical and mechanical alignment errors. The error typically is in the centreing of the secondary mirror. Consequently, when a laser is installed its beam will seldom return dead-centre, even though star testing might indicate perfect collimation. In addition, the secondary mirrors convex shape magnifies any error by approx 5 times. Typically a well collimated SCT will return a laser beam at around 0.125″ to 0.250″ off centre. In order to compensate a different approach is required than when collimating a Newtonian:

An SCT primary mirror is fixed but you can collimate by adjusting the secondary mirror to a point parallel to the optical axis. There is a one-time-only preparation required for SCT laser collimation. First, after a star collimation (still the most accurate method) install the SCA laser collimator then mark the laser spot position on the target grid of the collimator. Then, when you next check for collimation, look to see whether the laser spot falls on the mark. If not, adjust the alignment screws on the secondary mirror to move the returning laser dot to the mark. At this point you will have set the telescope’s collimation back to a known position. Job done! 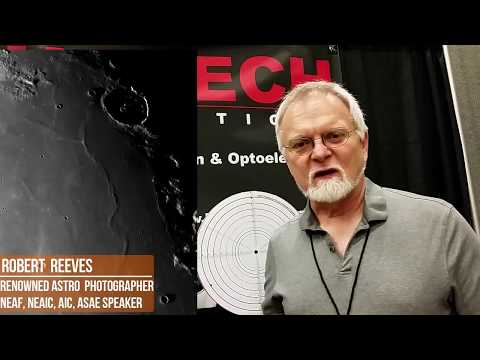 “Excellent collimator, made so much easier by the cross hair.” – Mark

“I first bought a laser collimator about 10 years ago and found it be completely useless and was hesitant to try the technology again. I wish that I had bought the Hotech laser collimator before. It actually works – this time being in agreement with my cheshire eyepiece during daytime set up. It was immediately useful in fine tuning the secondary alignment and now I will be able to collimate when it is dark and not have to rely on being able to preset up and collimate during daylight.” – Timothy

“I bought this collimator after borrowing one from a friend and finding out first-hand just how easy it is to use. The addition of the cross-hair is a great feature for making the alignment of the primary mirror very easy. This product, together with a set of ‘Bob’s knobs’ for adjusting the the secondary mirror, have transformed my ability to make sure my Skywatcher telescope is always optimally aligned.” – Michael

“Why did I wait so long?  Title says it all, worth every penny, my Newtonians are collimated so much better .” – Ross

“Really beautiful product, so well made and easy to use, the laser crosshairs makes this product an absolute breeze to use and produces spot on collimation results every time.” – Christopher

“Worth Every Penny.  I agonised for some time over which way to go with collimation after reading much about how inaccurate lasers are etc. All I can say is that this has made collimating my new 10 inch flextube dob (which by the way, needs some re- collimation every time I set it up) a simple process that I can do in the dark without any hassle and the star tests/ views I’ve had through the scope so far back it up. No need to tighten any bolts on the eyepiece holder, the compression ring system holds it firm and central in my 2 inch focuser. I will add that I also purchased a collimation cap to check secondary alignment and bobs nobs (also a godsend). Together they have been a great investment and for visual use seem to provide enough accuracy. Well worth the investment.” – Robert

“This is an excellent product and even though a complete novice I was able to collimate my scope very quickly.” – Ronald

“I purchased the 1.25in version to optimise planetary viewing with this size of eyepiece. It is a very well made and finished item of equipment, fits nicely into the focuser, but to take full advantage of it in the case of 2in focusers, you need a good quality 2in to 1.25 reducer, such as the Baader Click -Lock version, where it will fit without any slop.  It is quite easy to use, and one thing I noticed straight away, is that the laser light is much brighter than with most other collimators, this enables collimation to be carried out in full daylight, rather than requiring dimmed light. This is probably because it utilises a 3V CR123 battery, rather than small hearing aid type batteries, which have a short life, and with which it can be difficult to find replacements, plus are fiddly to fit.” – John

Questions?  Call us on 1300 ASTRODOG or just use the form!